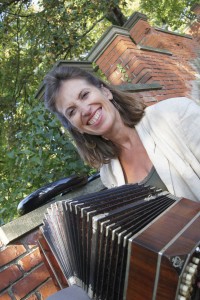 After training as an actress at the Neue Münchner Schauspielschule in Munich (Germany), Helena Rüegg worked at various German speaking theatres, e.g. at the Residenztheater München (Germany), at the Theatre of the City of Basel (Switzerland) and at the Schauspielhaus Bochum (Germany). In her most beloved performances, she interpreted the roles of Luise in „Kabale und Liebe“, of Lena in „Leonce and Lena“, of Anja in „Kirschgarten“ and of Karoline in „Kasimir and Karoline.“

„Jefet, tell us!” – this is the title of a song evening in which Helena Rüegg brings Yiddish songs, stories and jokes to her audience.

Helena Rüegg has sung in the Jazz-Ensemble „Collage 11“ by Eckard Koltermann and played in Koltermann’s chamber opera „Der Ungeheure Raum“ with texts by E.E. Cumings, which was presented for the first time in 1997 at the Prinzregenttheater Bochum (Germany) under Sibylle Broll-Pape’s direction.

In 1999, Helena worked with Martin Hägler at the Züricher Theater Neumarkt (Zurich, Switzerland) as musical director, bandoneonist and actress in „Alice“ by Robert Wilson and Tom Waits, directed by Olimpia Scardi and Stefan Hilterhaus.

In 2007, Helena creates the Solo-Programm „Air People and Golden Peacocks“, in which she sings and recounts Yiddish songs and stories from her grandmother accompanying herself on her bandoneon. While she usually performs this one-woman show in German, she also presentes it italian, french and dutch.