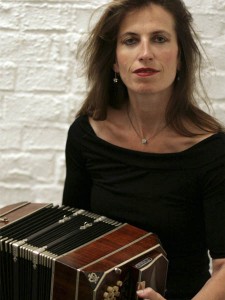 In her conference-concert „Tango, History and Histories“, Helena Rüegg leads us on a tour through the history and the stories of Tango, accompanying herself on her bandoneon. Various solo-arrangements reveal the different facets of this instrument that is immediately associated with Tango worldwide. It is less known that the bandoneon was developed in the middle of the 19th century by Carl Zimmermann in Carlsfeld, Germany (Erzgebirge). The instrument, called Bandonion in German, was originally intended to replace the organ on church processions. Soon, it was popularized and spread through all of Germany by mine workers and thus became known as „ the mine workers’ piano.“ Until the middle of the 1930s, there were more bandonion-clubs than football-clubs in Germany. In these clubs and in numerous factory orchestras, people came together after their workday to play the bandoneon and to provide the music for dancing evenings. Helena Rüegg complements this show with song texts from her book onTango and with anecdotes from her numerous travels to Buenos Aires and Montevideo. This magical journey conveys why the „sad thought that can be danced” (E. Discepolo) mesmerizes so many listeners and dancers on the entire globe. As a soloist, Helena Rüegg performs works for bandoneon and orchestra by Astor Piazzolla, Luis Bacalov, Roberto Palmieri and other composers, e.g.: the „Five Tango Sensations“ by A. Piazzolla with the Lausanne Orchestre de chambre (Switzerland),the „Tres Tangos“ by A. Piazzolla with the Stuttgart Radio Symphony Orchestra (Germany),“Maria de Buenos Aires“ by A.Piazzolla with the Bamberger Symphoniker and at the Staatstheater Wiesbaden, Songs by Carlos Gardel with the Tenor Juan Diego Flórez and the BBC Symphonic Orchestra at the BBC Proms (Royal Albert Hall, London) and the „Misa Tango“ by Luis Bacalov with the WDR-Radio Choir and the WDR-Radio Orchestra in Cologne, Germany and the festival orchestra, Arosa, Switserland.