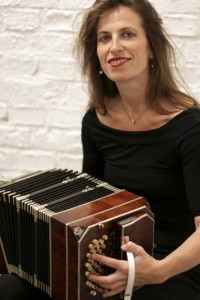 Helena Rüegg was born in Zürich (Switzerland). Today, she lives in Cologne (Germany) and Sigonce (South of France). In 1993, she started studying the Bandoneon at the Tango-section of the Rotterdam Conservatory, were she graduated in 1998 with a music diploma.

Since 1995, Helena performs in various Tango-Ensembles, e.g.: with the Quinteto Bailongo, touring through Argentinia and Europe with Rodolfo Mederos, with the Luis Borda Cuarteto and with the Paris-based Tango-Ensemble Gabriel Vallejo Quartet From 1998 to 2001, she played as Bandoneonist in Juan José Mosalini’s Grand Orchestre de Tango.

Días de Felicidad is her project with the French Tuba- and Serpent-player Michel Godard and the Argentinian guitar player Quique Sinesi. “From Bach to Piazzolla” is her duo-project with German Viola-Player Mischa Pfeiffer (WDR-Symphonieorchester) which she recorded in july 2015.

In July 2006, during the BBC-Proms, Helena plays in the Royal Albert Hall with the tenor Juan Diego Flórez and the BBC Symphony orchestra. In 2008, with the WDR Rundfunk Orchestra and the WDR Rundfunk Choir , she plays the „Misa Tango“ by Luis Bacalov and records this opus on CD.

In December 2009, in Rio de Janeiro, Helena composes and plays the music of Doña José, a choreography of Brazilian dancer Clebio Oliveiro. In 2010 and 2011, she plays the solo-part of the Misa Tango by Roberto Palmieri in several Swiss cities.

In 2011, Helena is the artistic director of a Bandoneon-Festival in Eisenach (Germany). 2013-2016 she is playing the Three Penny Opera and Rise and Fall of Mahagonny written and composed by Bertolt Brecht and Kurt Weill at the Staatstheater Wiesbaden and the Stadttheater Koblenz.